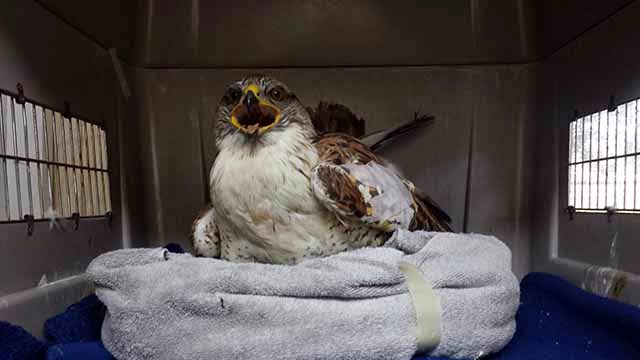 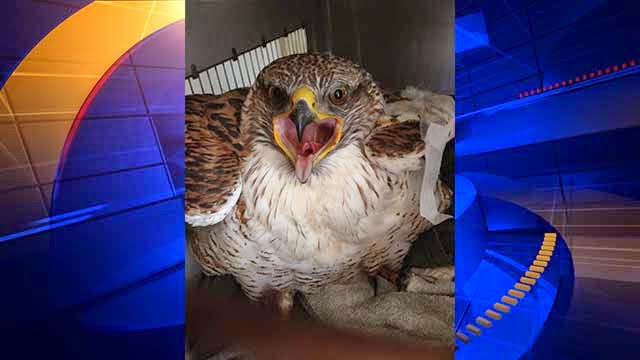 SANTA CLARA COUNTY, Calif. (KTVU) - At the Wildlife Center of Silicon Valley, an unusual patient has taken up temporary residence.

An injured adult male ferruginous hawk was checked in on Valentine's Day.
"The species is rare for our hospital to receive. We actually haven't had one come in in close to 20 years," said Ashley Kinney, Wildlife Rehabilitation Specialist, Wildlife Center of Silicon Valley.

The circumstances were even more unusual.
"Definitely unusual. We've never seen this happen," said Kinney.
The accident happened at the Santa Clara County Model Aircraft Skypark in Morgan Hill.
Michael Luvara, president of the Tomcats group that uses the park said via email that it was "purely an accident," and no other injuries were reported. He also said the wingspan of the model plane was about 4 feet.

According to rescuers, the pilot of the model plane feels terrible, and a ranger was called in to help the injured bird.

The bird was transferred to WCSV, where rescuers put a sling on its left wing.
"It's a fractured ulna of the left wing, so it's a fracture just right above the elbow, and it was luckily a clean fracture so no surgery was needed -- just stabilization," said Kinney.
Rescuers said the bird is an adult male ferruginous hawk with a wingspan of nearly 4 1/2 feet. The bird is now recovering in a small box that prevents him from flying or thrashing around too much.
It remains unclear why the accident may have happened. "Whether he was protecting his territory, thinking it's another bird coming into his territory, or just a freak accident and the plane maneuvered into the bird, we're not 100 percent sure how it happened," said Kinney.
Rescuers said they expect the hawk to make a fully recovery, and that they anticipate being able to release him back into the wild in Morgan Hill in a few weeks.

Posted by West County Hawkwatch Raptor Research Group at 12:16 AM