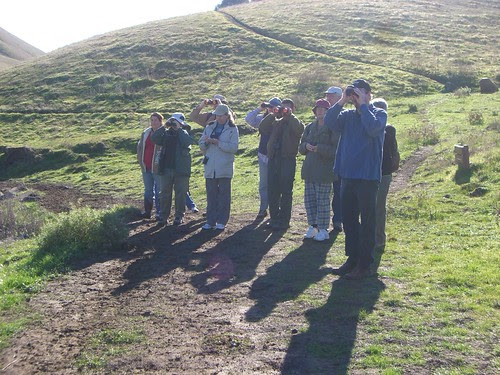 Lynch Canyon Tower Trail. Raptor Tour 11-20-2009., originally uploaded by norcal_birdman.
Golden Eagle wonderland...Solano Land Trust (SLT) Lynch Canyon Open Space. Teri Enbring, here photographed above second from the left. Teri was able to see the vision of bringing wilderness, wildlife and people together. Lynch Canyon Raptor Hikes. Once a vision of Jesse House and Larry Broderick to find high density hawk locations and share them and explain their importance to both thriving eco-systems and the greater public. That vision became closer when Jesse and Larry met Ken Poerner a SLT Land Steward, Ken was manning a Solano Land Trust kiosk at the Pacific Flyway Festival and we were discussing Ferruginous and Rough-legged Hawks in Solano County. We had seen them in good numbers along Flannery/Creed and Robinson/McCormack Rds, near the "Solano 113/12 grid". Ken mentioned Rush Ranch and Jepson Prairie and possibly doing a hike or walk, while we spotted and identified hawks. Eventually Ken got Larry to Teri Enbring and she explained Lynch Canyon has been a bustling bevy of hawk activity and the table was set. Teri and Larry set up a couple trial tours in 2007 or 2008? (need to verify) and the table was set. Since then we have done close to 50 events. Averaging eight a year. LB 2013
Posted by West County Hawkwatch Raptor Research Group at 10:20 PM