Big thanks to Jill and Sam for their help on the there hikes we did with The Wildlands Conservancy this season, thankful for the opportunity to share birds of prey with the enthusiastic public through our guided Raptor Hikes in 2020

Fun to see Susana and Anne along the way as well.

(all photos copyright to original photographers, use here for non profit and educational purposes only, photos here shown from WCHW photo pool and not of actual birds from the day, rather just references to help those learning, what we saw and how to tell what they are)

West County HawkWatch Migration and Over-wintering tour / Jenner Headlands.  As promised below is some ID help on what we saw.

Day started out with Red-tailed Hawks and American Kestrels 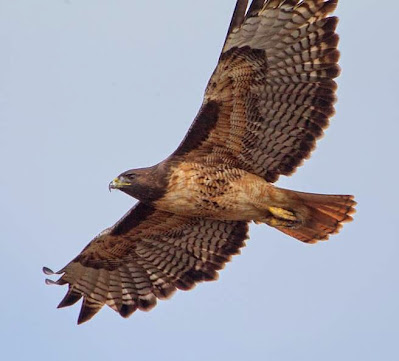 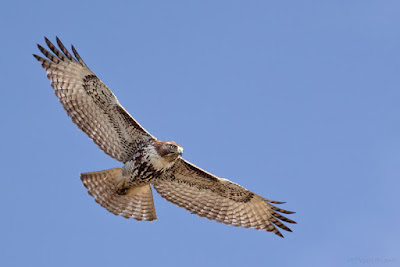 Next bird we discussed and viewed was the American Kestrel. This bird you can tell male from female by color, where as most other birds of prey male and female are the same color.  Male directly below, and Female below that.... notice the tails.... 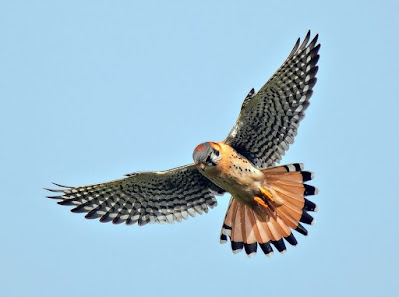 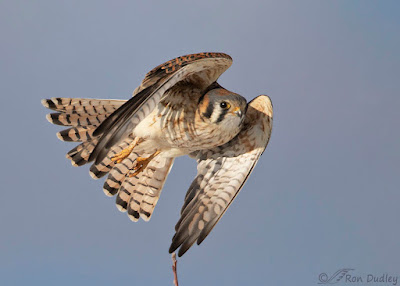 Right up past the eucalyptus grove we found a large buteo, largest buteo in North America, The Ferruginous Hawk, great looks at this large soaring hawk, it was an adult bird full of greys, some black and rust/orange tones on a overall tan/buff/light brown body. Key marks were the light colored grey head, one tone off white tail, orange leggings forming a "V" against the body, and the leading edge of the wing not a solid thick wing bar as a Red-tailed Hawk would have had, that is a distinguishing thing to use against Red-tailed and in identify a Ferruginous Hawk. 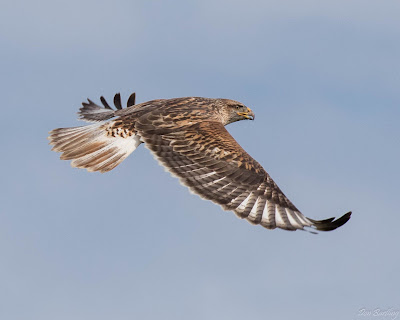 Top side view, aka Dorsal view (above) 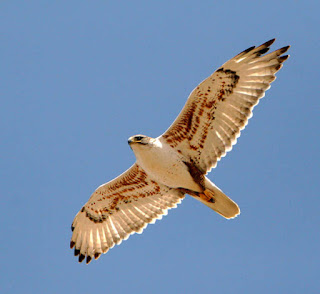 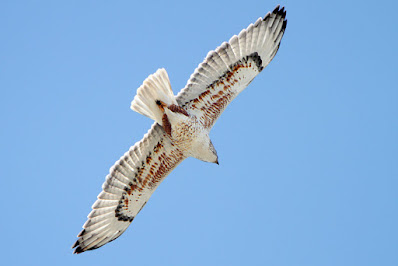 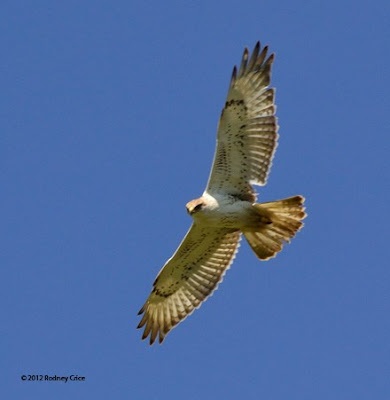 Here is a juvenile (directly above) for comparisons to the adult photos above this photo. Here the juvenile Ferruginous Hawk is more two tone; tan and brown and lacks the greys and rust/orange of the adults. Also notably the legging don't form a 'V' like in the adult. And last the tail has fine 'washed' out barring that the adults lack 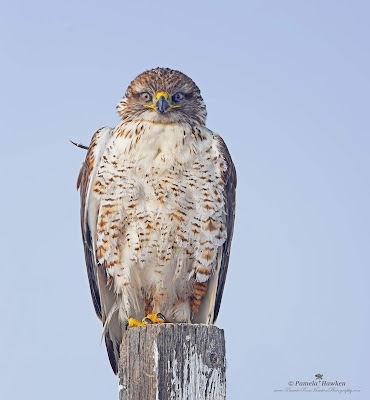 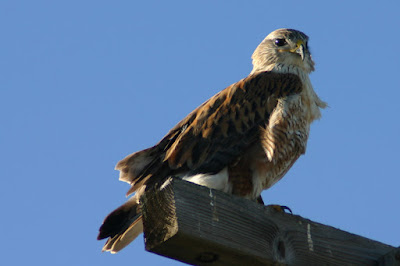 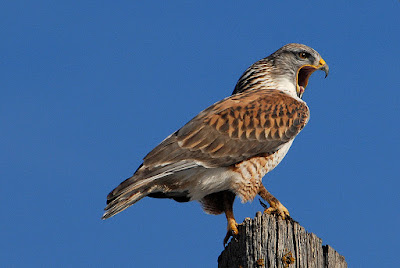 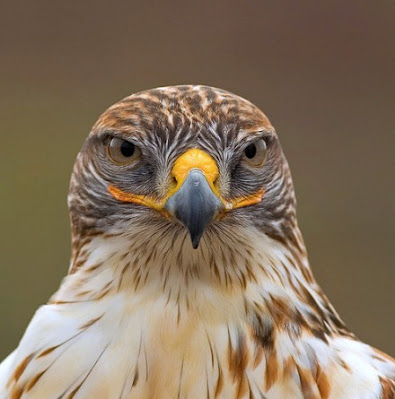 Photos of above are of Adult Ferruginous when perched up and close up, showing its magnificent colors, feathered leggings (only two other N.A. Birds of Prey posses feathered leggings) akso the Ferruginous hawk has a wide, big yellow gape.
In bird anatomy, the gape is the interior of the open mouth of a bird, and the gape flange is the region where the two mandibles join together at the base of the beak. The width of the gape can be a factor in the choice of food.

Along the ridge we had good looks at a Northern Harrier, saw a few more throughout the day, The one we saw close was an adult female. 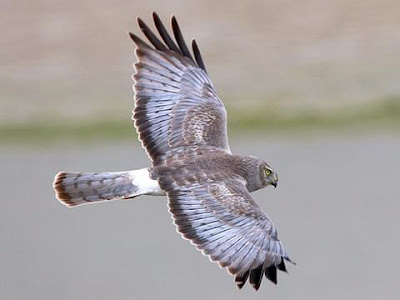 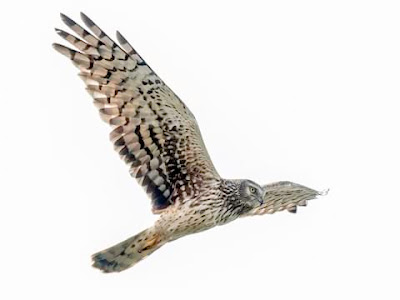 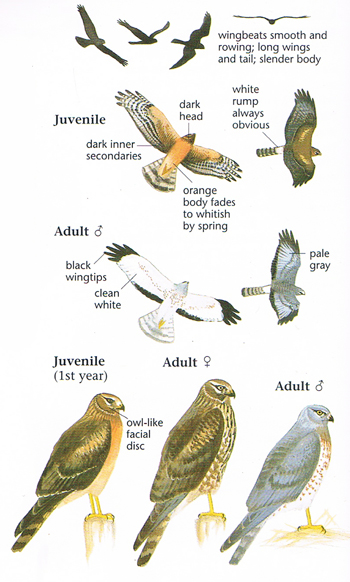 Next came the Merlin! Fast, saw the Merlin dive on prey and fly away and come back and fly away even faster! ...at least 100 mph, literally vanished in front of our eyes! Little dark, speedy falcon. As photographed below. 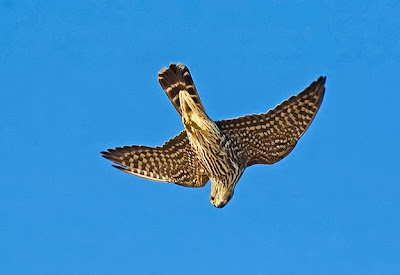 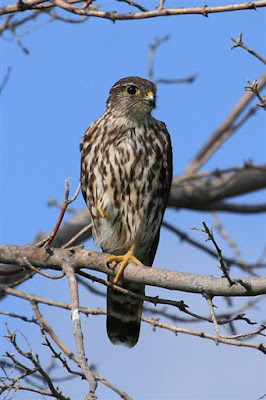 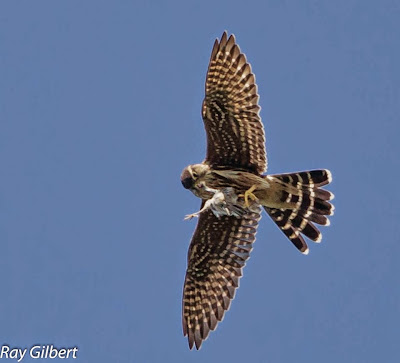 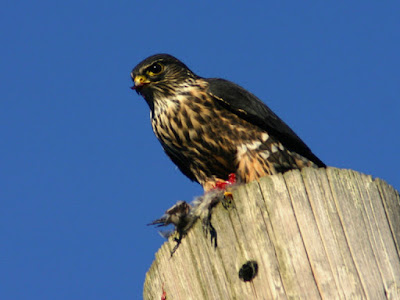 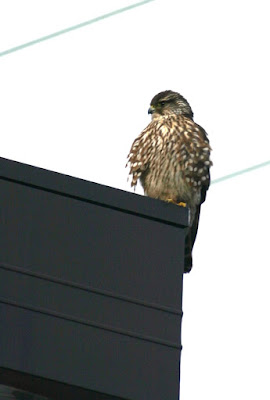 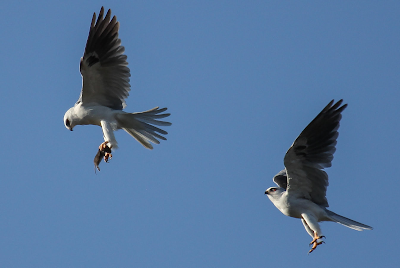 Back near the barn we saw a Juvenile Red-shouldered Hawk. (like the one photographed below) 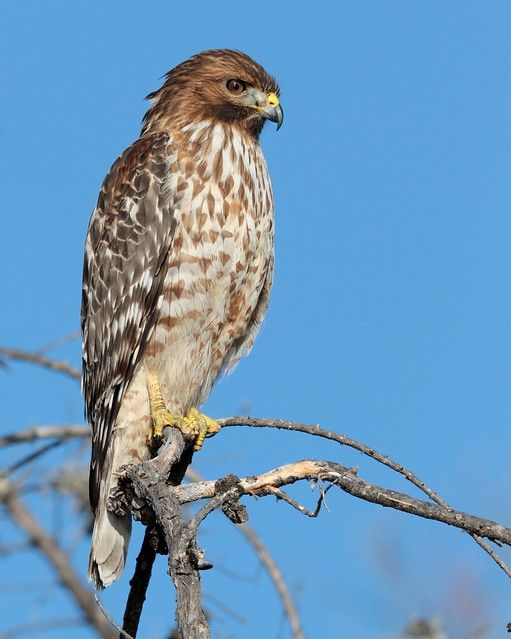 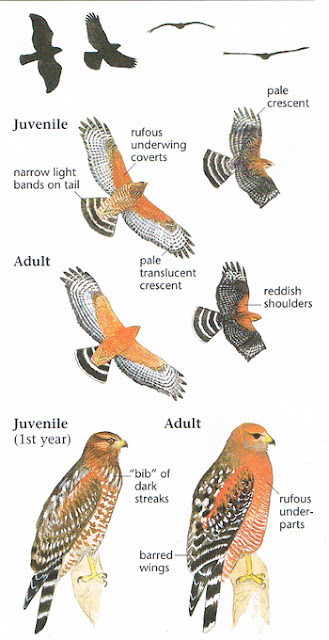 above is both juvenile and adult Red-shouldered Hawk Reference material

To end the day... as we were finalizing the days sightings and events, we had a Sharp-shinned Hawk slam into a group of sparrows right behind our cars! the sparrows got away but the Sharp-shinned Hawk made several follow up attempts, came up empty handed (talon'd) ... but I am sure that it eventually caught its dinner, very tenacious and determined bird. Small woodland hawk, know as an accipiter in the genius family and species is Sharp-shinned Hawk. Bird was a juvenile comprised of sooty greys and browns, small head, big eyed, squared tail, short winged, wristy looking (head not to far passed wrists in flight) bird... [Hawk!] 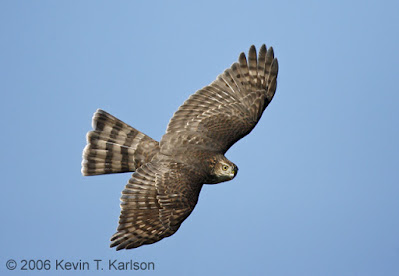 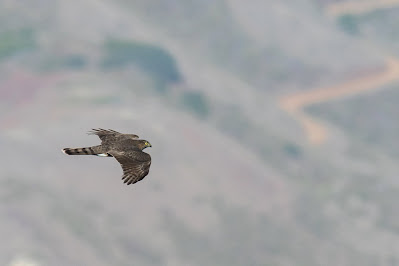 Great day!
Will update this post again after proof reading and alignment verification, post read differently on different media platforms...
thanks for coming out, it was good fun, excitement and great company
sincerely. Larry B. West County Hawkwatch

Posted by West County Hawkwatch Raptor Research Group at 11:36 AM 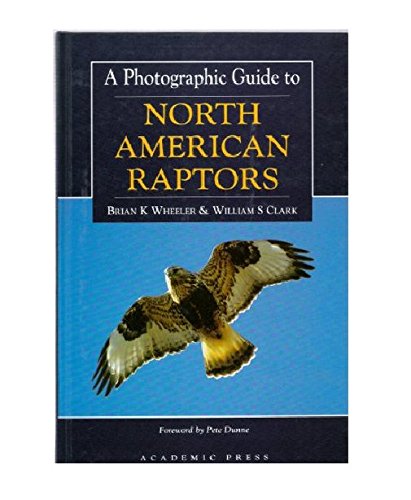 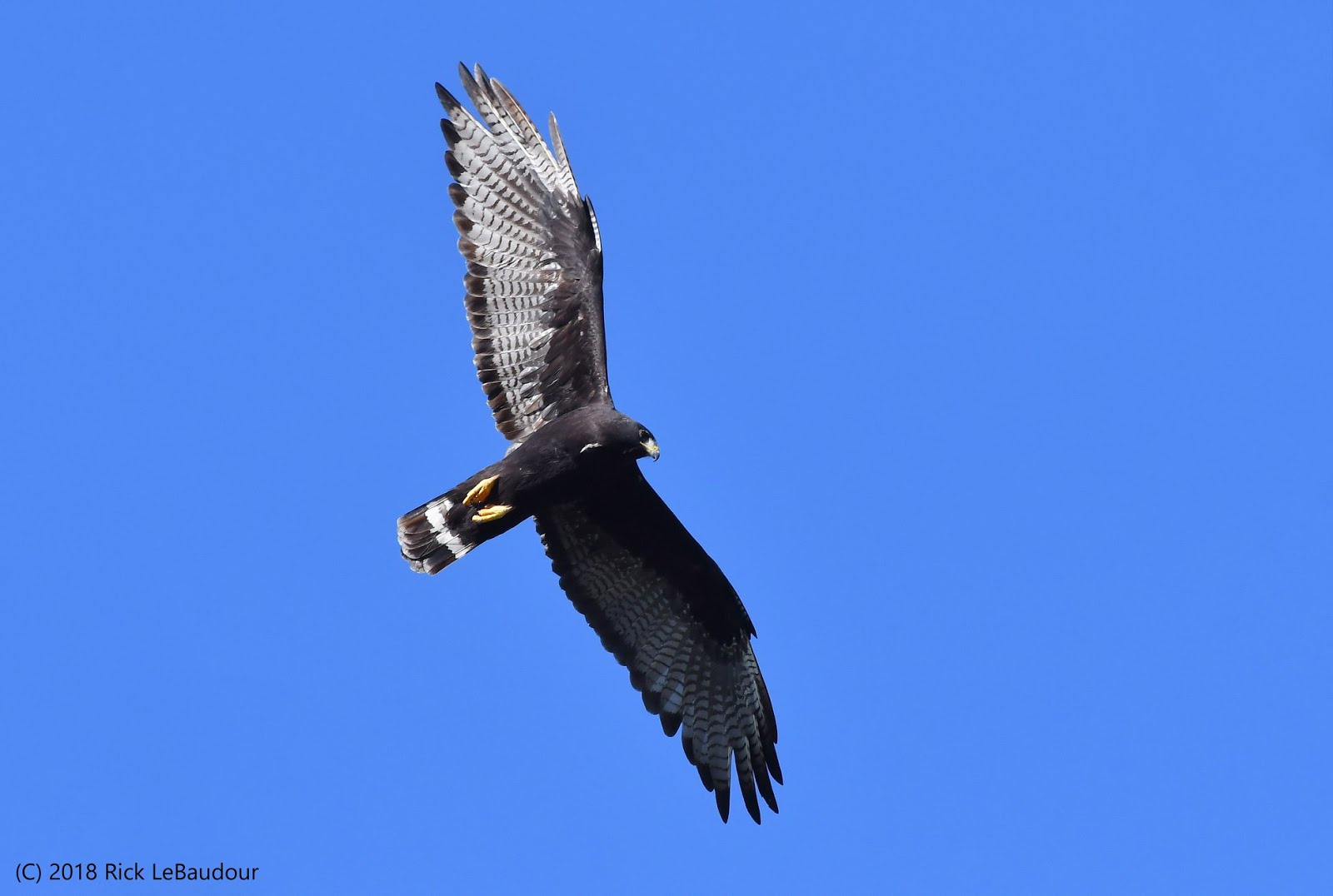 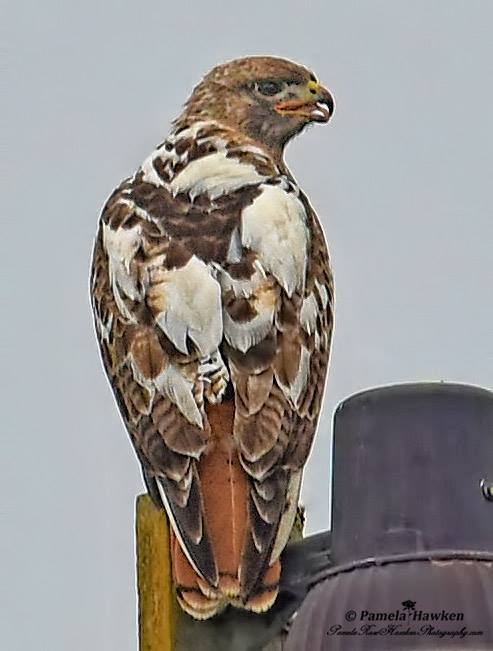